The year twos have worked especially hard this term. Not only have they been busy with all our usual areas of the curriculum but they have also been performing in our filming of 'The Magical Christmas Journey". The Giants had achieved 100 class wide rewards and I had to think of something special to reward such hard work!

So, for this term's class wide reward party, we had a virtual visit from the awesome author and illustrator.......Nick Sharratt!

This visit all began from a competition I entered to win a copy of his new book "Shark in the snow!"

Incredibly, I won the book and Nick Sharratt signed it to...the Giants! 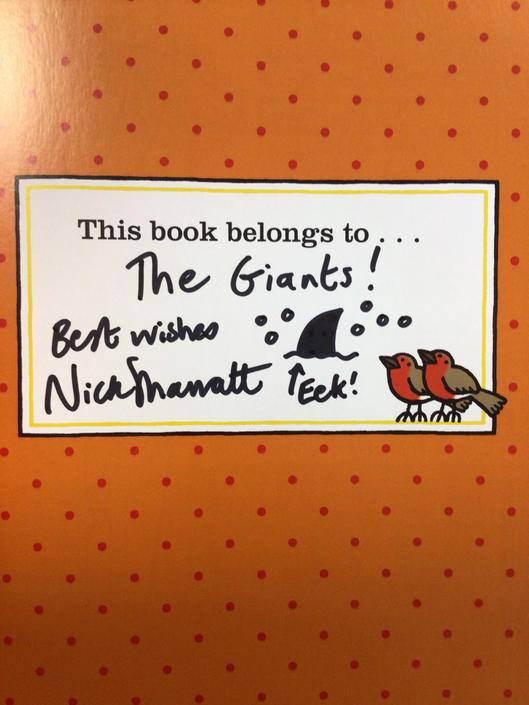 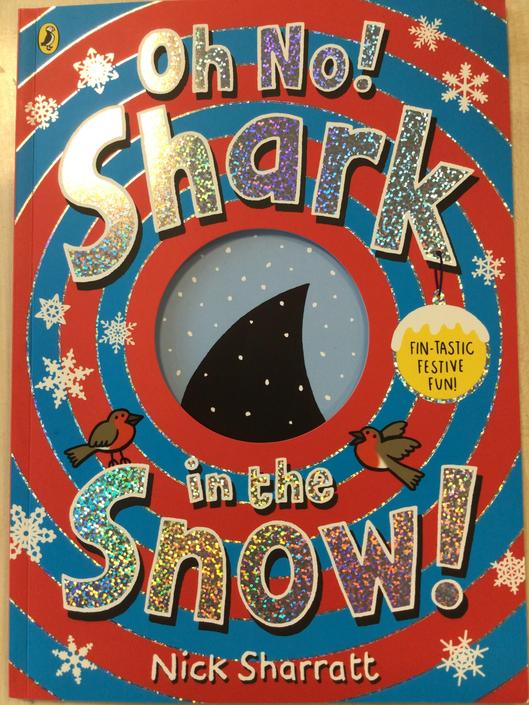 And what a performance it was...

The children loved it!...but there was more! He also played a game of "Ketchup on my author!" He used a spinner to see what he had to put on his head! With most hilarious results!

A real highlight of his virtual visit was that he showed us how to draw some of the characters from his books! 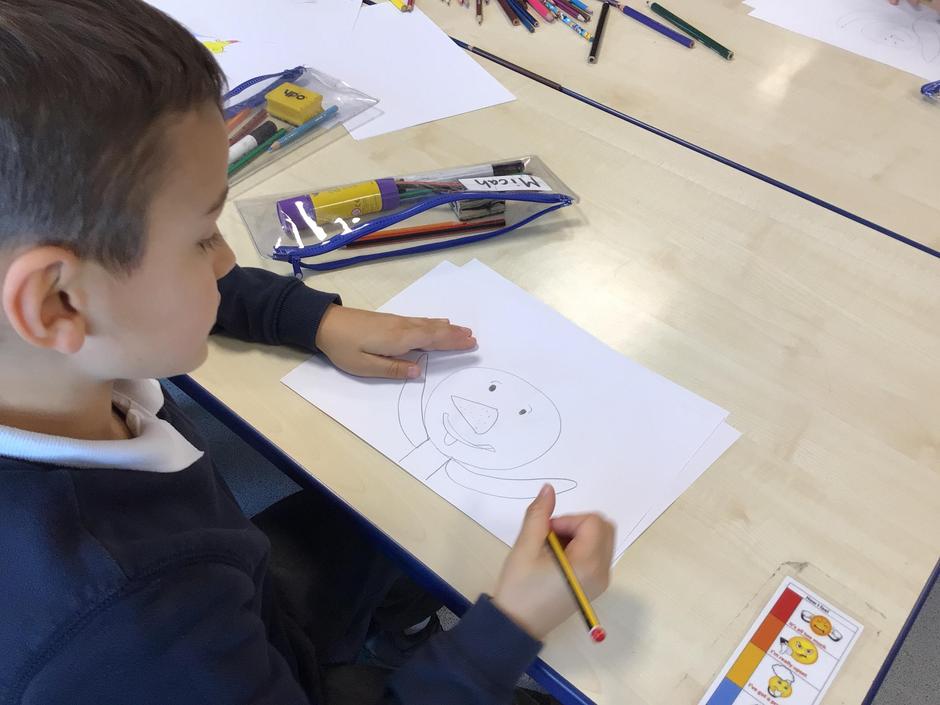 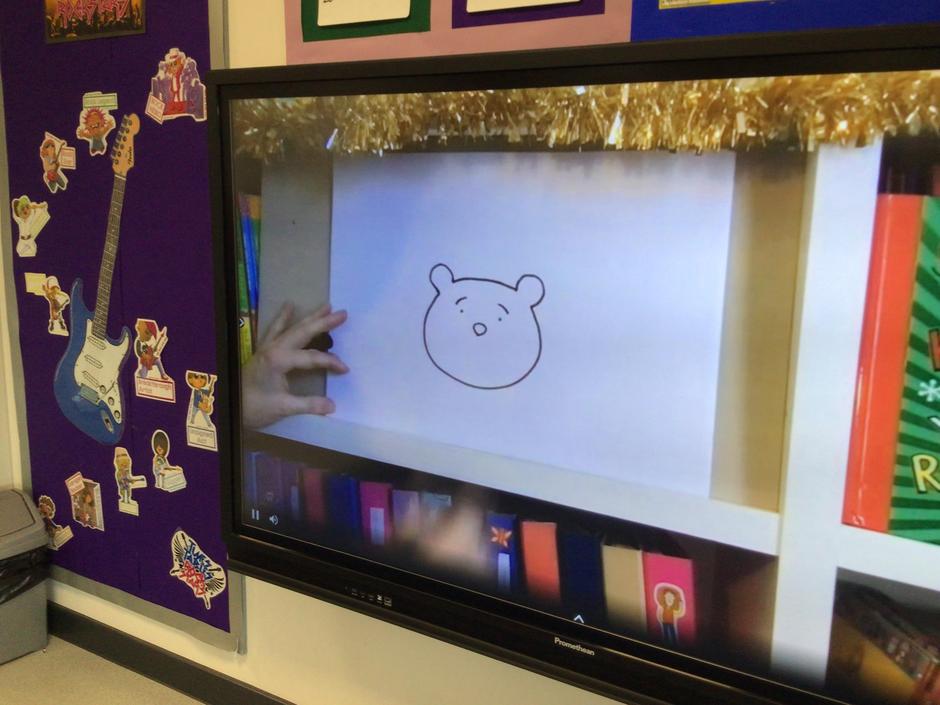 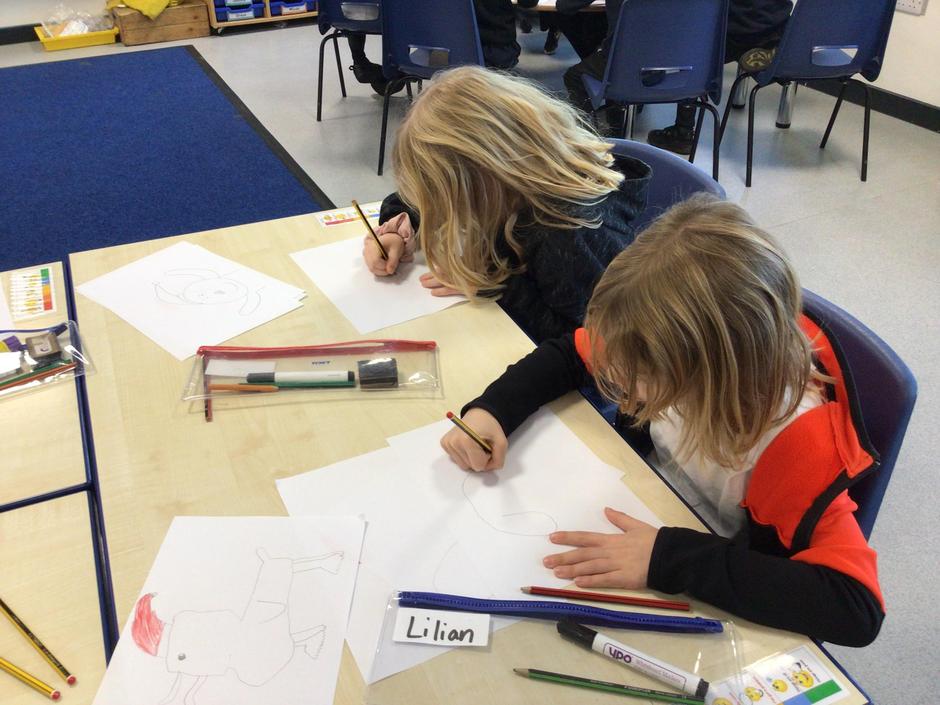 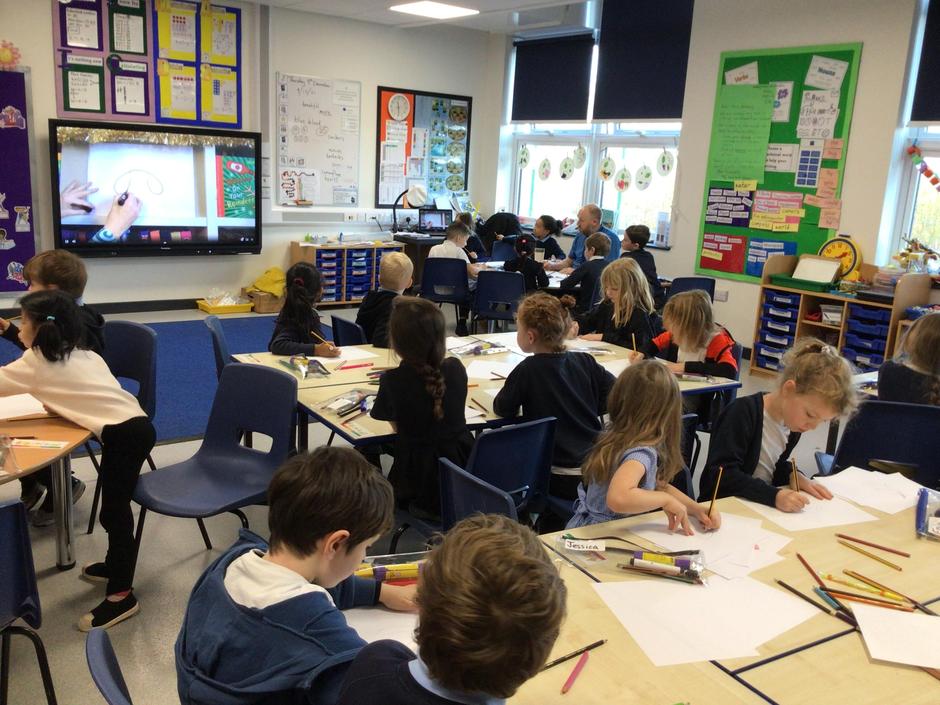 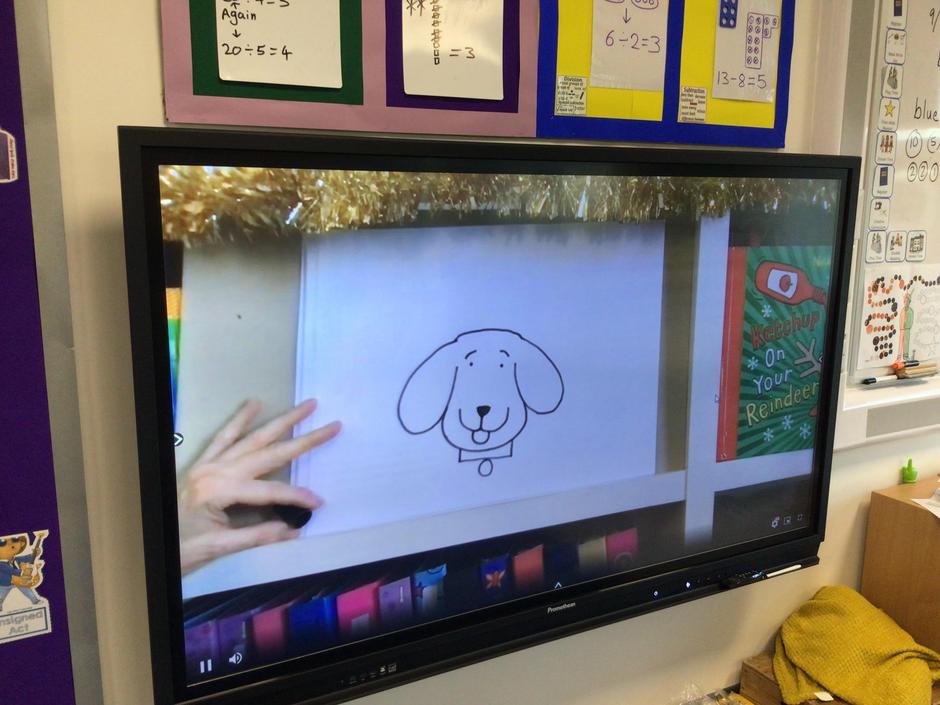 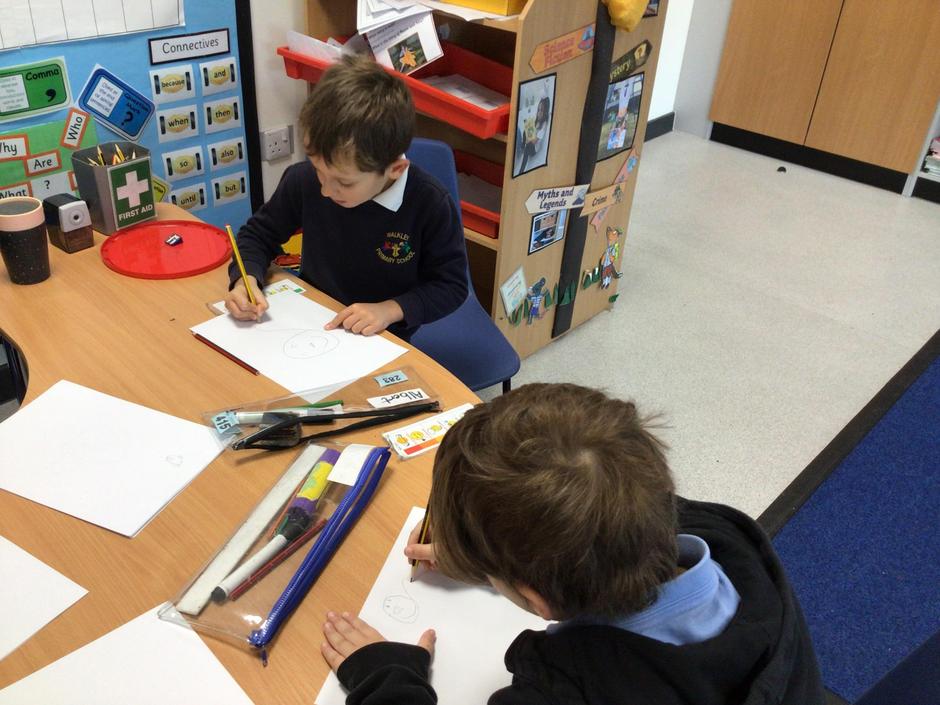 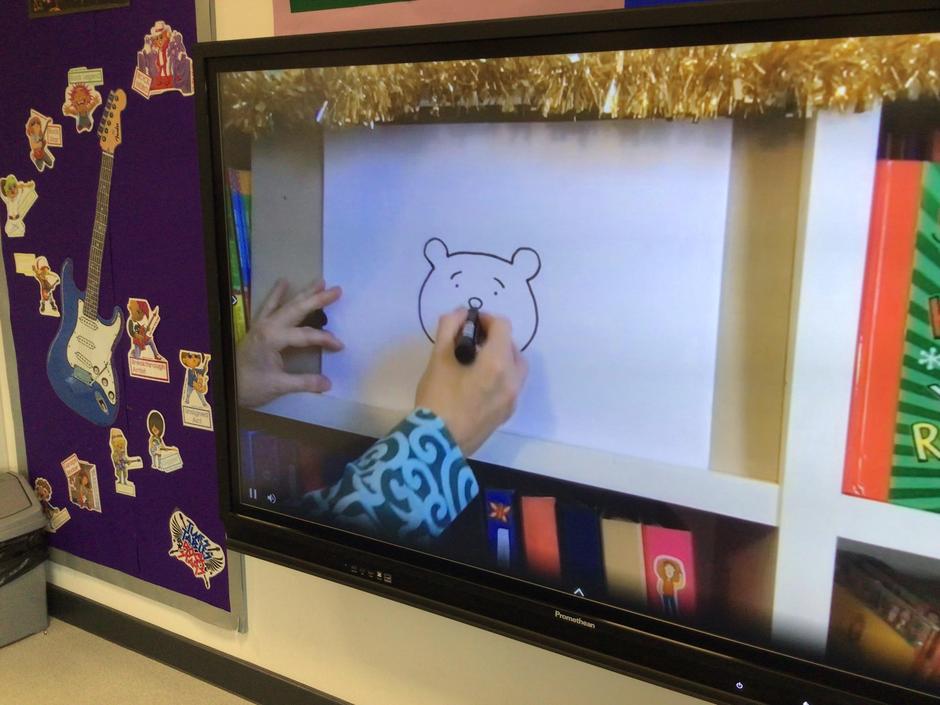 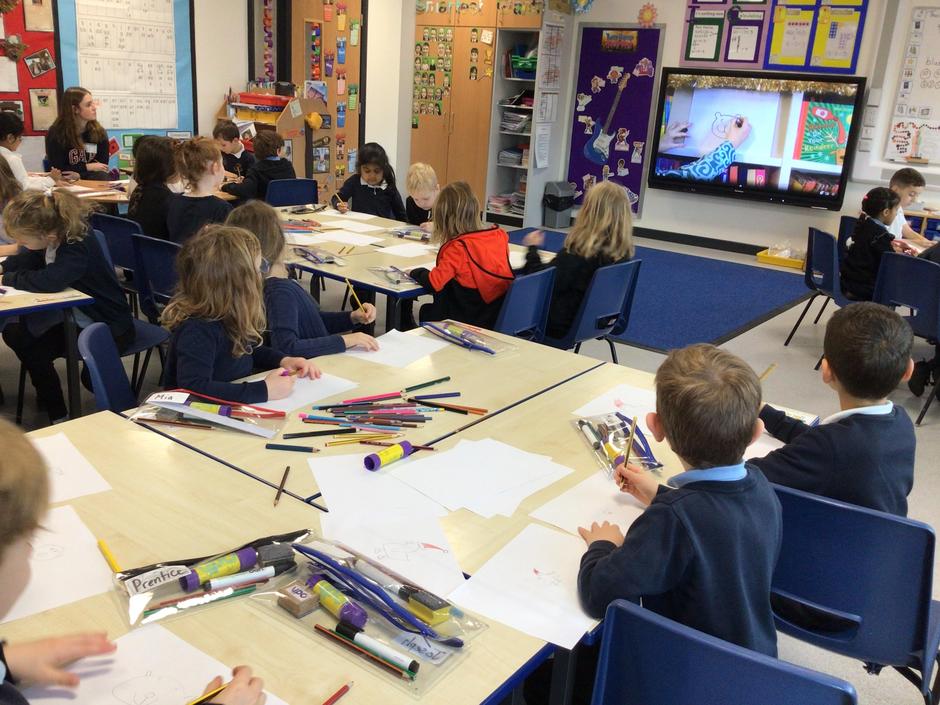 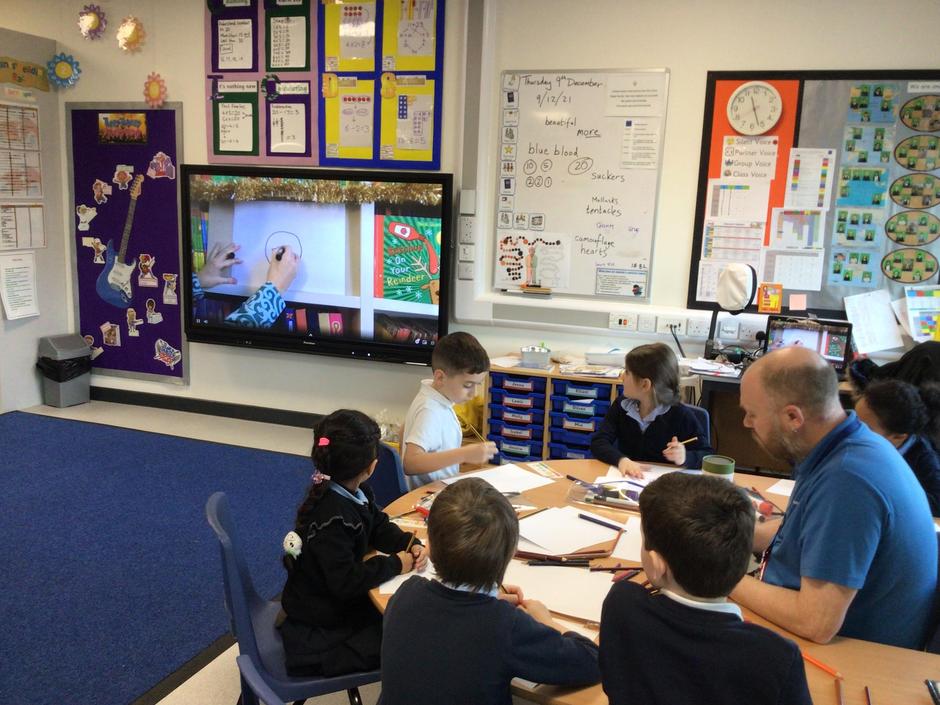 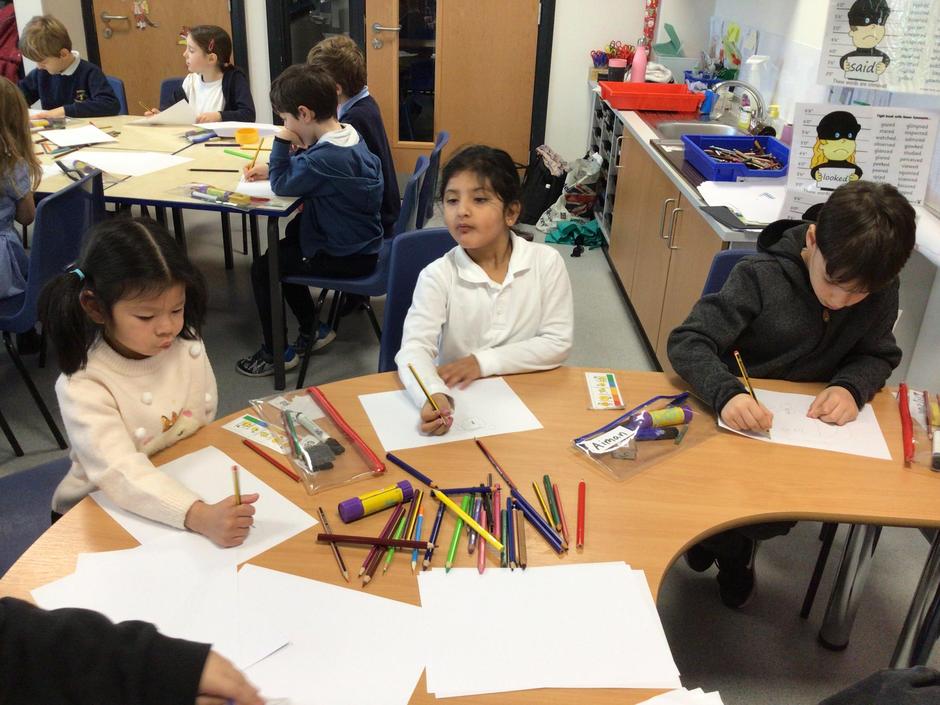 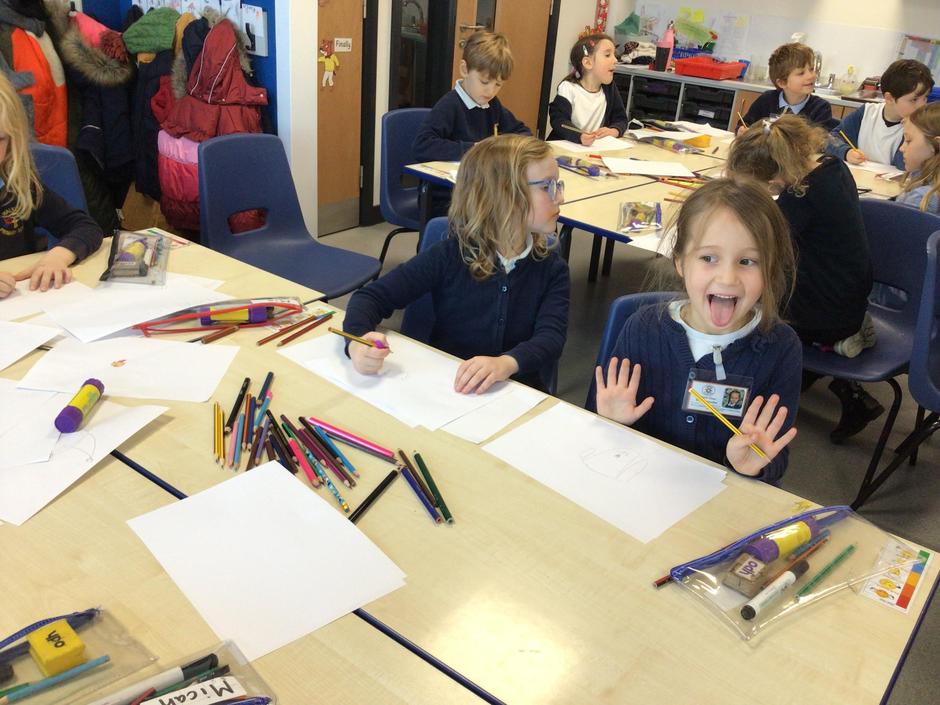 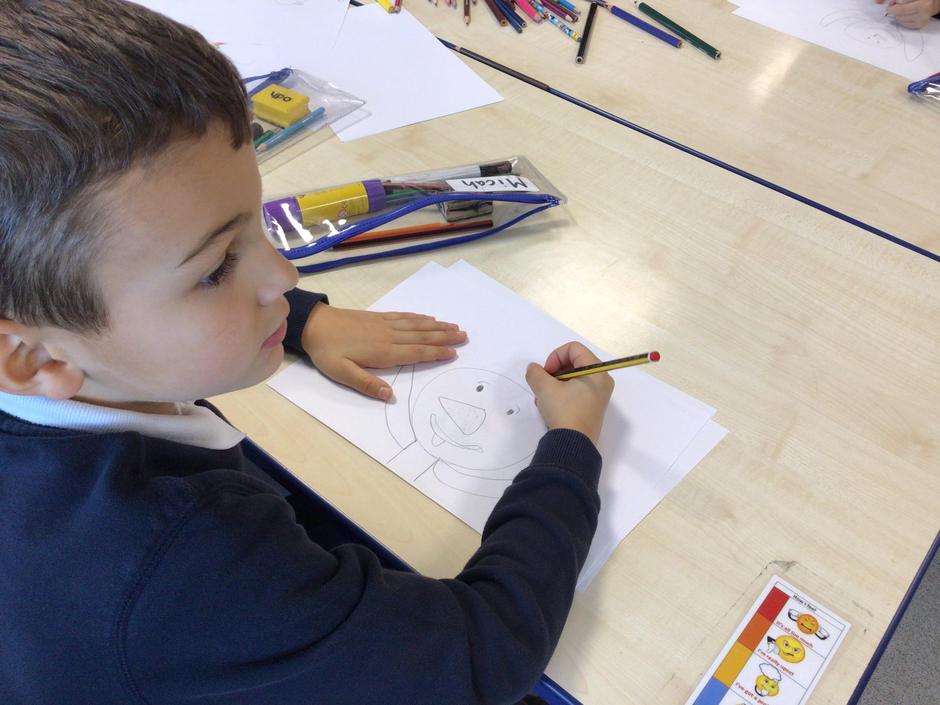 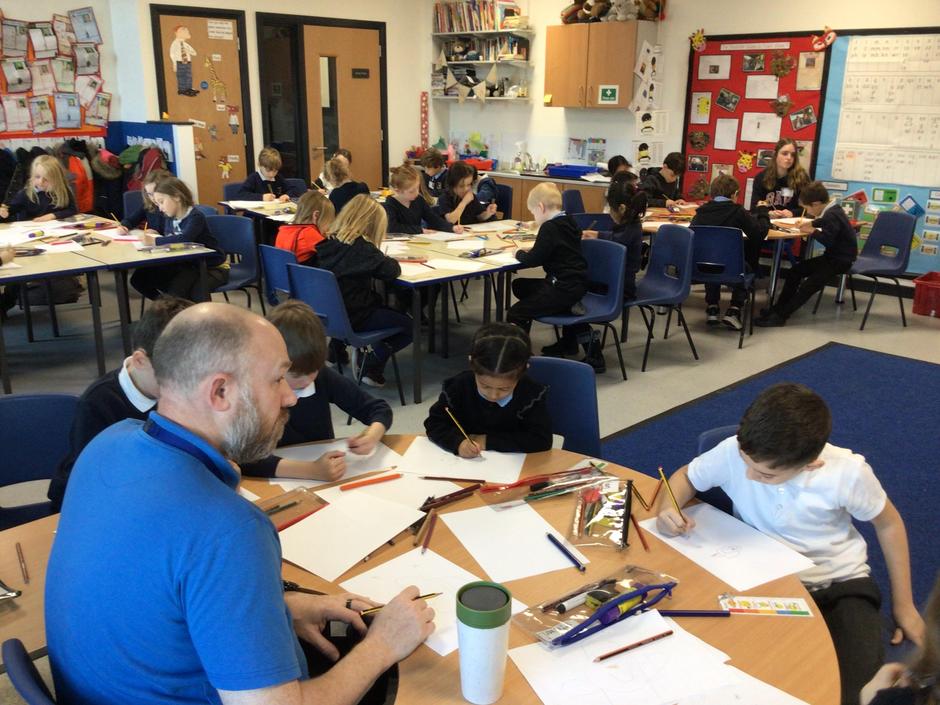 Here are some of our efforts. I think we can all agree that the Giants did a magnificent job!

This week, we have continued our Humans and living things topic by learning about the life cycle of a butterfly. The children combined art and science by making these plates that illustrate the life cycle beautifully!

This week our ship sails on the Atlantic ocean to the beautiful island of Tobago where there is a large Hindu population. We have arrived just as Diwali celebrations are in full flow! The Giants will research all about this vibrant and wonderful event which celebrates light over darkness and the incredible story of Rama and Sita. Please watch this great BBC cartoon version.

Rehearsals for "The Magical Christmas Journey: The Movie" are going triumphantly. We already have 4 songs filmed in the can! We look forward to the 13th of December where it will be premiered on the school website for you to enjoy with your families.

We have enjoyed counting in 5s this week in our maths CLIC sessions. Please practise at home!

We are so happy that Amy Dazzle Dance is back in school. This term it is the year 2's turn and we are learning a new dance that will be a routine in our upcoming Nativity film. This dance has been inspired by a certain other Nativity production. I hope you're looking forard to seeing it as the children are working really hard. It's also fantastic that we are now using our all-singing and dancing dance studio!

This term our topic is "Land Ahoy!" where we have been tasked by the National Geographic Kids magazine to sail around the world's 5 oceans to report on island cultures, ocean wildlife and the issue of plastic pollution. The first thing we needed to do was design our boat. Here are some excellent designs inspired by various real life ships such as the Sir David Attenborough and Jacque Cousteau's Calypso.

The Smartest Giant in Town Show!!

After a half-term full of planning, designing, creating masks, researching animals, hunting animals in the forest school and finding a treasure trove of adjectives, writing, editing and completing a golden write, it's time to perform in the greatest show on Earth! I'm referring of course to "The Smartest Giant in Town show!!"

It took place on our outdoor stage in the old KS2 playground. Our audience was the Gruffalo class (Who were an amazing audience!).

Our compere for the show was none other than NR who did a sterling job of welcoming everyone and letting them know the running order.

Good afternoon and welcome to the Smartest Giant in Town show!!

Today we will have:

I hope you enjoy the show.

A visit from the local police reading out wanted posters sent a chill through the audience!

Next, the giant (played by DD and GC) met the animals and helped them with their problems.

After that, our resident scientists read their research work on foxes.

To lighten the mood, our in-house comedians told some jokes about giants!

What is a fear of Giants called?

How do you talk to a giant?

You use big words

I used to be scared of Giants but now I look up to them.

Did you hear about the Giant who was sick?

It’s all over town

Where do you find Giant snails?

At the end of a Giant’s finger.

Finally, a show isn't a show without merch!

Thank you for enjoying the show! The Gruffalos were the perfect audience.

Computing  at Walkley ensures that pupils become digitally literate – able to use, and express themselves and develop their ideas through, information and communication technology – at a level suitable for the future workplace and as active participants in a digital world.

This week we have learned how to animate a story and record voices for narration and speech using PuppetPals. The children were really imaginative creating their stories and were able to manipulate the puppets changing their size and position in order to progress their story.

This week in maths, year twos are adding 2 two digit numbers whilst shopping. If you would like to have a go at home, play this game from Top marks. You can choose whichever level suits you. Have a go at level 1 and then move up if you are finding it too easy. What level can you reach independently?