Did someone say potatoes?

We were treated to a yummy surprise this week from Ruth (EG's mum in Caterpillars.) A few months ago she planted some potatoes with the caterpillars and they planted some extra ones for us. They were growing outside the caterpillar classroom for a few months. Then yesterday, Ruth came back and we sat together in the hall to harvest them. We dug into the pots with our hands. We grabbed the potatoes and then we counted them.

Today Ruth brought us the cooked potatoes and the caterpillars chopped them into pieces. The Seashells picked some herbs from the sensory garden and then we cut them up. We mixed them up with the potatoes and added a bit of butter. Then we ate them, yum yum yum!

Wow! Our trip to Cleethorpes (the 'real' Cleethorpes) finally happened this week and what an unforgettable day it was.

The Caterpillars and the Seashells were absolutely amazing! Just as they have been on every trip that we have done this year. They smiled, laughed and thoroughly enjoyed themselves. They were also perfectly behaved and were so polite and well-mannered that if we had any energy left we'd love to take them back again tomorrow!

The activities that we had set up for 'Walkley-thorpes' came with us on the coach but this time we got to enjoy them whilst walking on the the soft, warm sand, what a feeling! We had real seaside chips, (which tasted delicious!) and we collected so many shells that I'm surprised there are any left on Cleethorpes beach!

We saw ships far out on the sea, donkeys walking up and down the beach giving people rides, we passed many sweet shops selling all sorts of seaside snacks too. We had a big photo in front of the pier before we got on the coach to come home. Rather a lot of tired legs by the end but we made it. I hope that the children had as much fun as we did, they certainly looked to be enjoying themselves. Thank you everybody! What a pleasure it is to work with such fabulous little superstars! Thank you to our wonderful Walkley staff, and to the parents for being so supportive and organised getting the children ready this morning. I think it might be time for a sleep now!

The Seaside comes to Walkley!

After the disappointment of the coach not turning up for our trip to Cleethorpes, the staff decided to bring the seaside to Walkley. The children waited patiently while the hall was transformed into a magical seaside paradise. There were sandpits full of fun sand toys to build, and mould and sieve. Water bowls with fish and sea creatures just waiting to be caught in the nets. A dingy to pull around in the pretend waves. Picnic rugs for chilling out and lying on on the beach. Deckchairs and parasols to relax under . Beach games including ring toss, parachute and beach ball, and you could even hear the sound of the sea!

The children thoroughly enjoyed themselves playing and exploring. They were amazing at using their imaginations to hear the sound of the sea in the shells, or pretending they could see boats on the water or tanning themselves under the sun! They are going to be expert beach explorers when we go to Cleethorpes for real in a couple of weeks!

At lunch time we had our packed lunches in the classroom sat on picnic rugs. We were going to go outside but unfortunately the weather was a bit too cold! The sandwiches were yummy and the chocolate cake went down very well too! After a play outside, the children returned to the 'Seaside' for more fun and games including giant parachute and a shell hunt. Meanwhile, a rather delicious smell started drifting around the hall... Miss Hill had been to fetch some yummy chips!! We sat on our picnic rugs and ate the chips, they didn't last long!

What a long day! Thank you to everyone for making what could have been a sad day into one that was full of laughter, smiles and fun memories. Next, bring on the real 'Seaside. Watch out Cleethorpes, we are ready for you!!

This term we are talking all about building. Our first story is The Three Little Pigs. We read the story and watched a video version of it too. Then we had a go at acting out parts of the story outside. We even built our own stage and scenery. Some children took on the role of narrator whilst other became the characters. We had an audience and a presenter who introduced the story.

The children were amazing at remembering the events and what the characters needed to say. 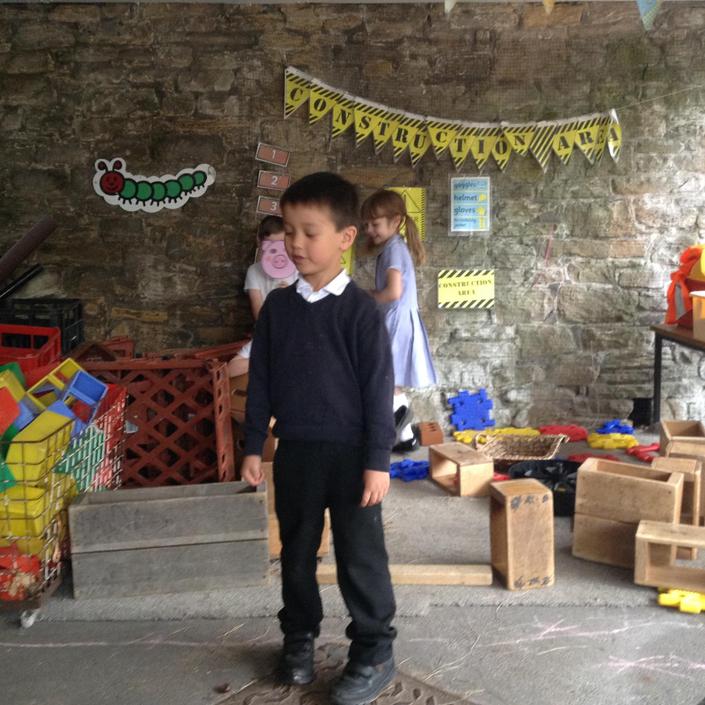 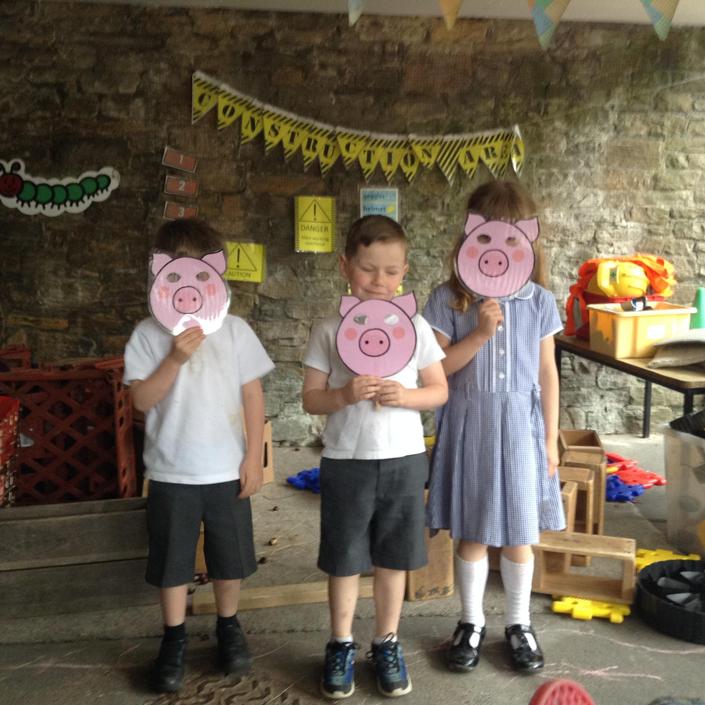 The seashells had a go at becoming the big bad wolf! We read the story of the 3 Little Pigs and discussed the best materials to use for a house. We talked about which materials were easy to blow down. We looked at a selection of objects and materials and made predictions about which ones we thought would get blown away by the wolf. The children then became the wolf and tried to blow the objects away. They 'huffed and puffed' but did they blow away?

We received a very special delivery of a real honeycomb from one of the Year 1 parents. We enjoyed looking at the honeycomb and smelling the delicious honey. We had a great afternoon making and eating honey and toast. 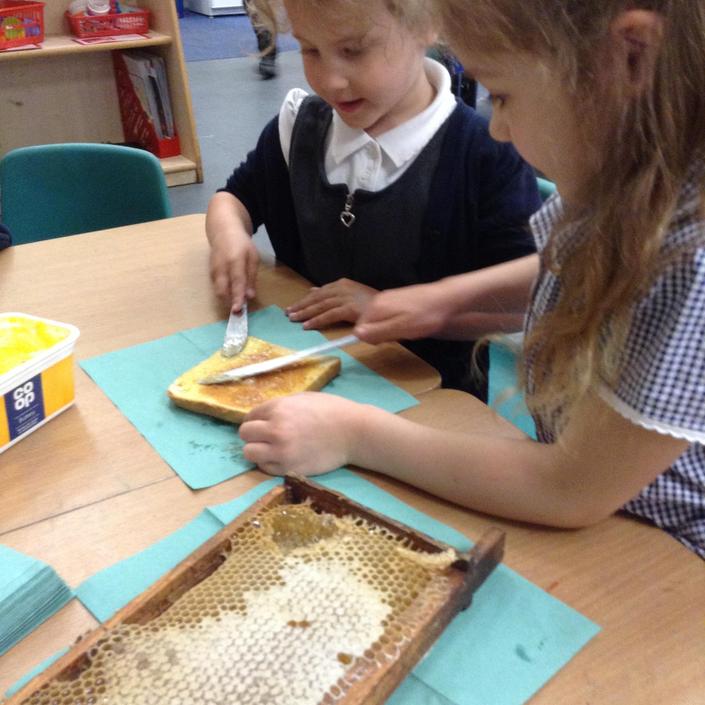 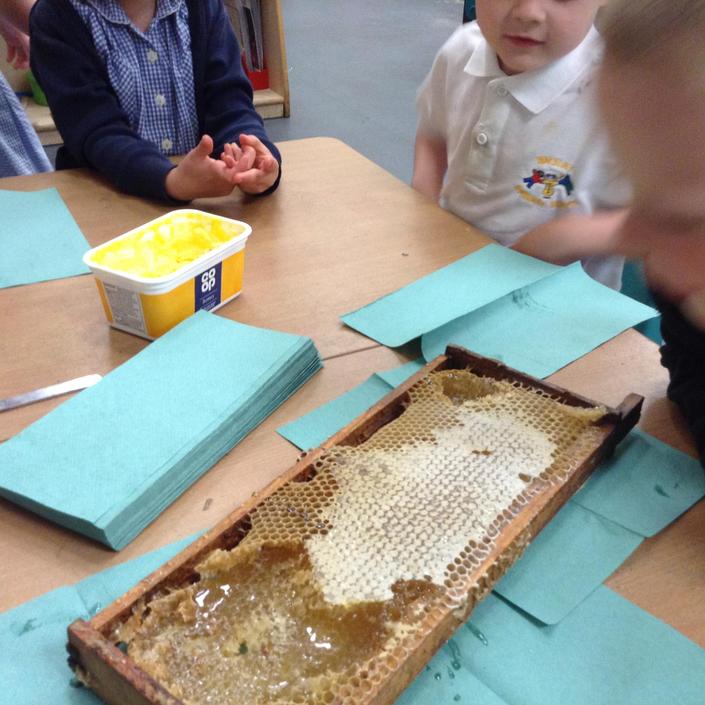 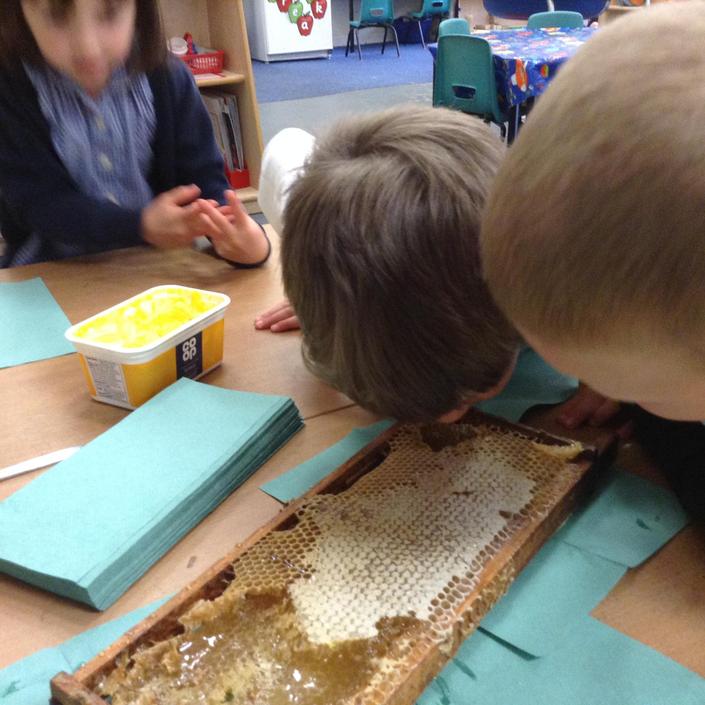 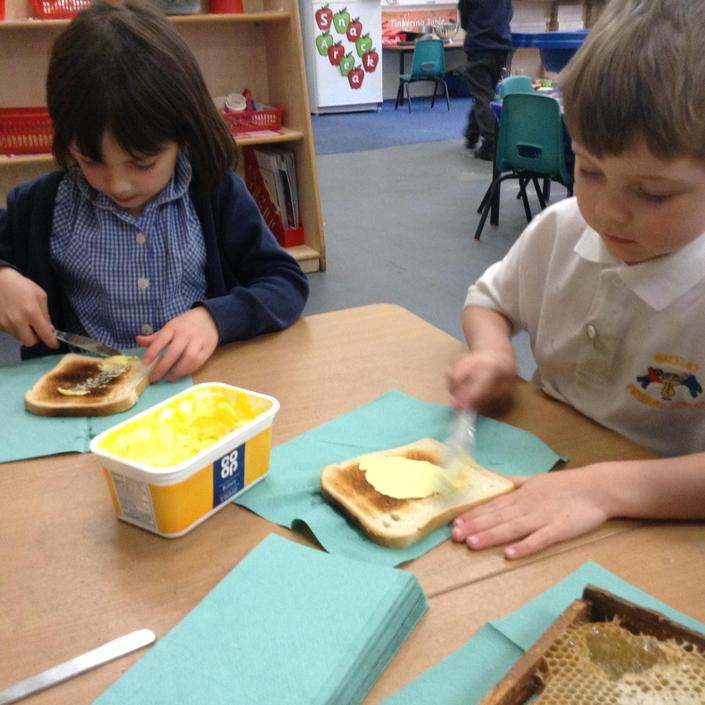 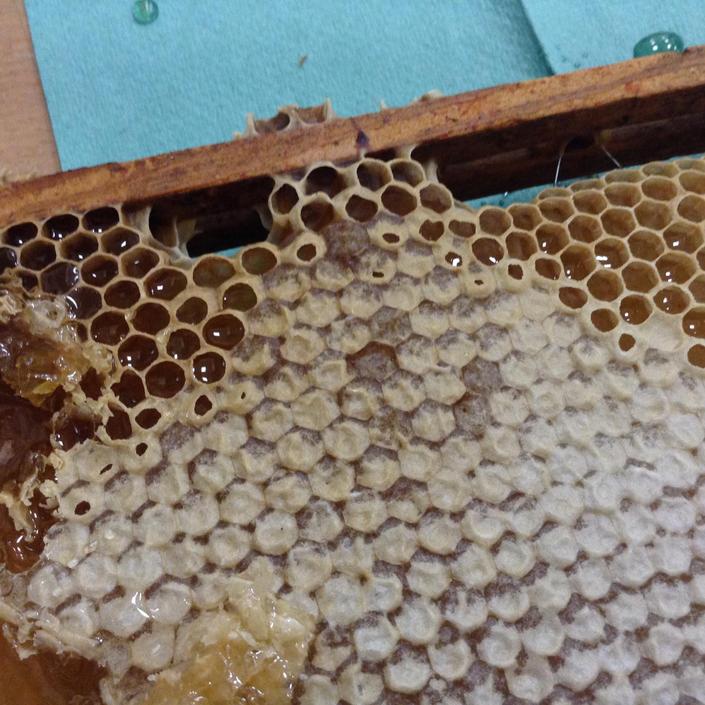 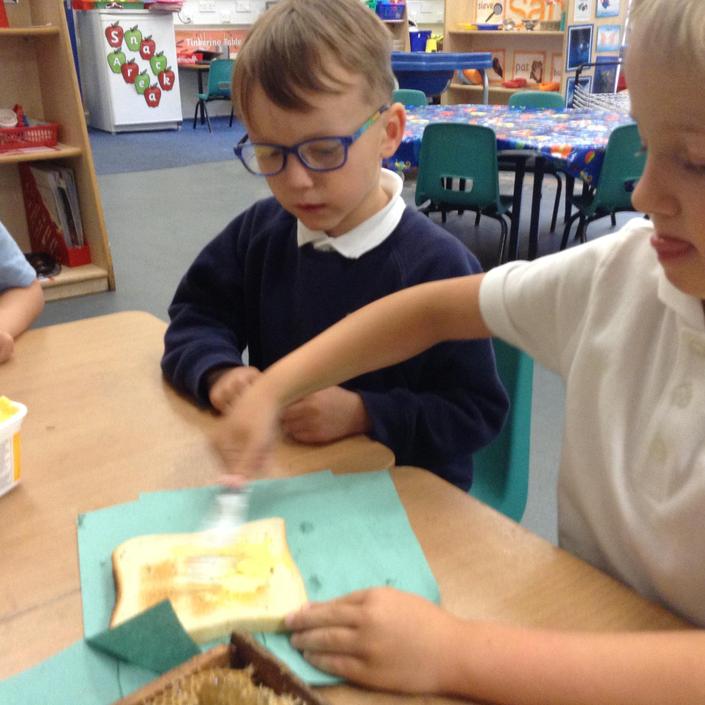 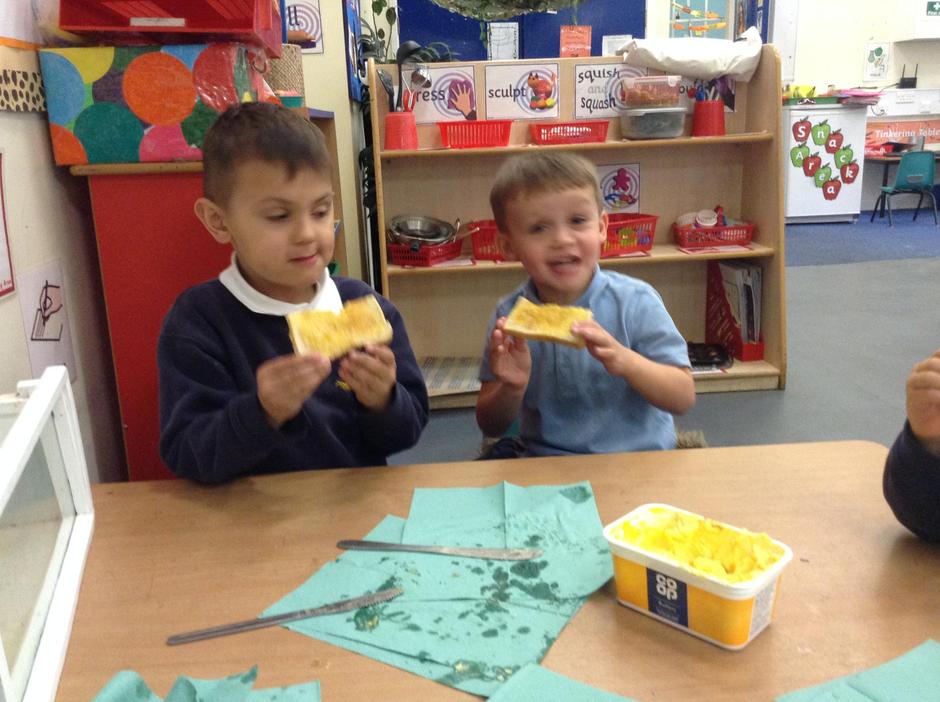 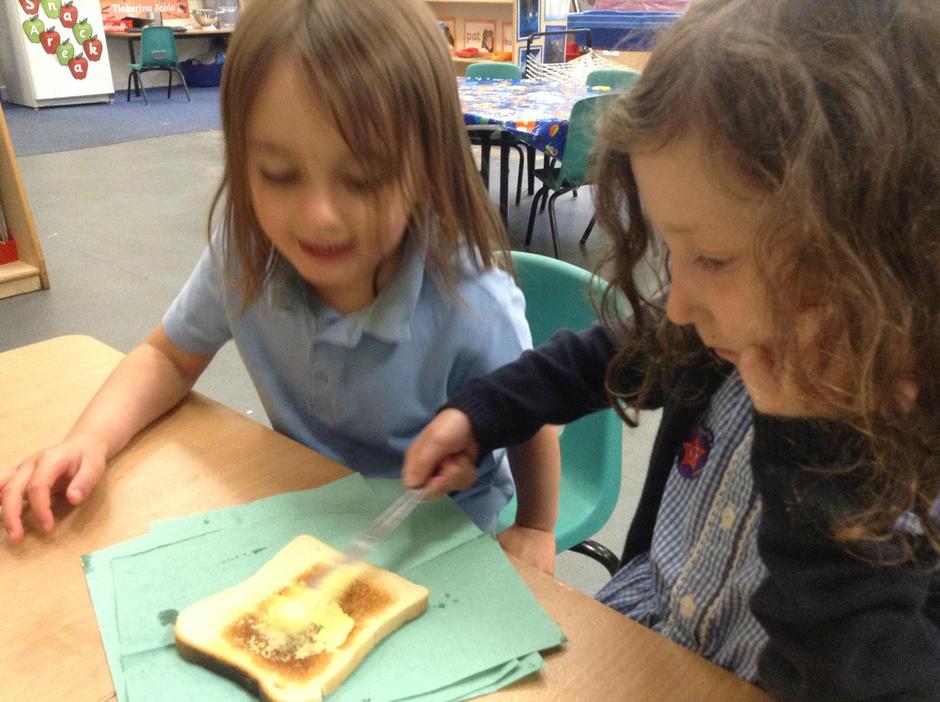 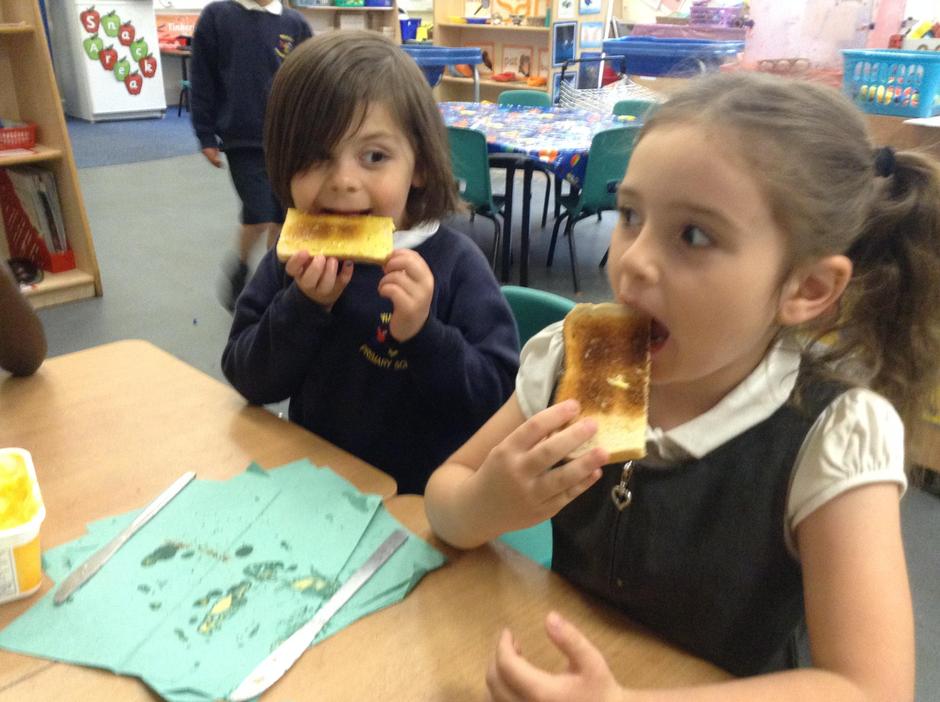